This tour is perfect for those who are interested in Chinese historical attractions. By joining this unique tour, all travelers will be able to explore places that are listed as UNESCO world heritage sites.

Besides unveiling Beijing's long-lasting culture and history, your tour will focus on leading you to the relics discovered in both Shanxi and Shaanxi province. Shanxi literally meant "the land west of Taihang Mountain"; it is often regarded as the cradle of major Chinese civilization since the province used to be the domain of the three legendary kings: Yao, Shen and Yu. Shanxi is said to carry the most aboveground historical and cultural relics in China and the most remarkable ones are the Yungang Grottoes and the Hanging Monastery (Xuankong Si) in Datong and the ancient city wall of Pingyao.

As for Shaanxi province, it had been a prosperous area for 1,100 years. 73 emperors had built their capital cities there (a total of 13 dynasties) and it contained the most underground relics in China. You will concentrate on exploring Xian's historical sites, such as the 8 th World Wonder-Terracotta Warriors and Horses Museum. 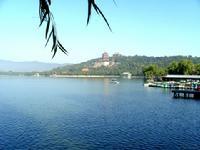 Begin your day with a tour at the Forbidden City. Listed as a world heritage site in 1987, the Forbidden City contains the largest group of intact palace structures in the world. The palace is 720,000 square meters in size and contains 9,999 rooms, numerous pavilions, gardens and courtyards. Then visit the Tiananmen Square. Noted as the largest city square in the world, the square was initially designed for political rallies and important gala events. Today the square is flanked by the Forbidden City in the north, the Great Hall of the People in the west, Mao TseTung's Mausoleum in the south and the Museum of Chinese Revolution and the Museum of Chinese History in the east. This afternoon, stop by at the major 2008 Olympic Venues including the National Stadiums - "Bird's Nest", the National Aquatics Center - "Watercube" on the way to the imperial gardens of the Summer Palace. The palace was originally built in 1750 and was rebuilt in 1886. Located in the western outskirts of the city, the Summer Palace is the leading classical garden in China and a UNESCO world heritage site.
Day 4 : Beijing
meals: B/L
Visit the UNESCO world heritage site today. Begin your day with a tour at the MuTianYu section of the Great Wall. Constructed more than 2,000 years ago by China's first emperor, the ancient wall is the world's longest man-made structure at approximately 4,000 miles in length.
Day 5 : Beijing/Datong
meals: B/L/D
Explore the fascinating Hutong neighborhoods. Beijing's oldest Hutongs were constructed during the Yuan, Ming and Qing dynasties. Your tour will take you through some of the best-preserved Hutong neighborhoods, which represented the history, culture and lifestyle of old Beijing. After a special homemade lunch at a local family residence in the Hutong Lane area, visit the Temple of Heaven which is China's largest temple and altar. It is often regarded as the most recognizable symbol of China. Early this evening, get onboard an overnight train to Datong .
Day 6 : Datong
meals: L
Arrive in Datong early this morning in Shanxi Province. Then, visit the Yun Gang Grottoes located at the base of the Wuzhou Mountains. The grottoes contain 51,000 sculptures scattered throughout 53 rock caves and the earliest could be dated back as early as 460 AD. Regarded as one of the national treasures, the grottoes became a world heritage site in 2001. Return to Datong during the late afternoon. This evening explore the city or retreat to your hotel room for some fun down time with your family or group.
Day 7 : Datong/Pingyao
meals: B/L/D
Visit the extraordinary Hanging Monastery (Xuankong Si) located south of Datong. Precariously constructed on the sheer cliff face above Jinlong Canyon, the monastery is more than 1,400 years old. With the aide of natural alcoves and strong beams, its 40 halls and pavilions cling stably to the rock walls. Stairways, corridors and boardwalks are connected to all buildings, hence forming breathtaking views at the valley floor. Return to Datong and take high speed train to the city of Pingyao.
Day 8 : Pingyao
meals: B/L/D
Originally constructed during the Zhou Dynasty (256 BC), Pingyao is among the four ancient Chinese cities that remain intact. Visit Pingyao's city wall. The city is known as "Turtle City" because of its six gates: two each at the east and west gates, and one each at the north and south gates. You can explore some antique stores, restaurants and cultural sites the rest of the afternoon. Then stay overnight at the Dejuyuan Hotel.
Day 9 : Pingyao/Xian
meals: B/L/D 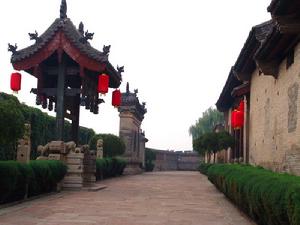 Today you will have the opportunity to explore the Wang Family Courtyard (Wang Jia Da Yuan), which is said to be comparable to the Forbidden City in size. While the Forbidden City was designed for the use of the emperor and the royal family, the Wong Family Courtyard served as the residence of a civil official. One special characteristic of the courtyard home is certainly the intricate carved frescoes that decorate many of the building walls.You will take high speed train to to Xian.
Day 10 : Xian
meals: L
Known as Chang An during ancient times, Xian was the capital of China for 13 dynasties (around 1,062 years). Visit the ancient city wall today. Built during the early Ming dynasty with a core of mud covered by three layers of bricks, the city wall of Xian is the only one that remained intact. After lunch, visit the Shaanxi Provincial History Museum for an in-depth look at China's extensive history and 2,000 exhibition displays.
Day 11 : Xian/Hu County
meals: B/L/D
Embark on an amazing historical and cultural adventure today. Begin your adventure by exploring the Terra-Cotta Warriors and Horses Museum, a UNESCO world heritage site since 1987. Created 2,000 years ago to guard the tomb of China's first emperor Qin Shihhuang, the painted details of the soldiers and horses faded away during weathering, thus showing their original colors. After lunch, travel to Hu County. The county is famous for its peasant artists who create vibrantly colored peasant paintings and intricate papercuts. You will have a rare opportunity to stay at a local farmer's home tonight to enjoy the friendly hospitality and fresh homemade meals.
Day 12 : Hu County/Xian
meals: B/L
Enjoy your stay in the countryside and browse workshops and galleries where you can learn about different artistic techniques, purchase artworks and paper cuts or even try creating your own magnificent work of art. Visit the farmers' fields and livestock-keeping areas to explore different Chinese farming practices. Return to Xian during late afternoon.
Day 13 : Xian/Beijing/USA
meals: B
This morning, your guide and driver will provide a transfer to the airport for your early morning flight to Beijing. Depart China's capital, cross the International Dateline and arrive home the same day.

Note: Customer Commitment - Each Lotus agent is committed to respond to each email with an acknowledgement of receipt within 24 hours. If you do not receive email acknowledgement within 1 business day, please check your spam box for our agents'response e-mail or send your notice to iris@lotustours.net or call 1-800-956-8873.
To review full listing of terms and conditions, refer to: http://www.lotustours.net/info/terms.shtml
China Orphanage Addresses Colorado Heritage Camps Holt International Photo Gallery Sitemap
Lotus Travel, Inc. 5390 Col De Vars Pl NW, Issaquah, WA 98027 1-800-956-8873 Privacy policy