The Yangtze River (Chang Jiang) is the third largest river in the world, just behind the Nile and the Amazon. The Three Gorges Dam Project remains a controversy worldwide since its construction and it is the largest construction project in China after the Great Wall. In fact, Sun Yat- Sen, the father of modern China was the pioneer of the project. He proposed to build a hydroelectric dam at the Three Gorges in 1919. Upon the dam's construction completion in 2009, the Three Gorges Dam will become the largest hydroelectric dam in the world; some of its primary functions include generating electrical power from Chongqing to cities as far as Shanghai and preventing notorious Yangtze River floods. Around 100 towns were "drowned" due to the water rise in 2003 and the scenery of the Three Gorges has changed forever. Be sure to enjoy the gorgeous views throughout your cruise!

Tour Overview
Tour Code: YRA-18
Trip Duration: 12 days/11 nights
Click below for: Tour Price / Accommodations
Beijing, Xian, Chongqing, Yangtze River Cruise, Yichang, Shanghai
Departure Dates: Every Sunday
Day 1 : USA/BEIJING
meals: n/a
Depart the United States today to begin your Yangtze River Adventure. Cross the International Date Line en route to China.
Day 2 : BEIJING
meals: n/a
Arrive in Beijing late this afternoon. Your English-speaking tour guide and driver will meet you at the baggage claim area and provide a private transfer to your hotel. Have a restful evening (possibly enjoy some extra pampering at the hotel's spa or salon services!) and relax while you adjust to the time zone change and your new surroundings.
Day 3 : BEIJING
meals: B/L
Begin your day with a tour at the Forbidden City. Listed as a world heritage site in 1987, the Forbidden City contains the largest group of intact palace structures in the world. The palace is 720,000 square meters in size and contains 9,999 rooms, numerous pavilions, gardens and courtyards. Then visit the Tiananmen Square. Noted as the largest city square in the world, the square was initially designed for political rallies and important gala events. Today the square is flanked by the Forbidden City in the north, the Great Hall of the People in the west, Mao TseTung's Mausoleum in the south and the Museum of Chinese Revolution and the Museum of Chinese History in the east. This afternoon, stop by at the major 2008 Olympic Venues including the National Stadiums - "Bird's Nest", the National Aquatics Center - "Watercube" on the way to the imperial gardens of the Summer Palace. The palace was originally built in 1750 and was rebuilt in 1886. Located in the western outskirts of the city, the Summer Palace is the leading classical garden in China and a UNESCO world heritage site.
Day 4 : BEIJING
meals: B/L
Visit the UNESCO world heritage site today. Begin your day with a tour at the MuTianYu section of the Great Wall. Constructed more than 2,000 years ago by China's first emperor, the ancient wall is the world's longest man-made structure at approximately 4,000 miles in length.
Day 5 : BEIJING/XIAN
meals: B/L/D
Explore the fascinating Hutong neighborhoods. Beijing's oldest Hutongs were constructed during the Yuan, Ming and Qing dynasties. Your tour will take you through some of the best-preserved Hutong neighborhoods, which represented the history, culture and lifestyle of old Beijing. After a special homemade lunch at a local family residence in the Hutong Lane area, visit the Temple of Heaven which is China's largest temple and altar. It is often regarded as the most recognizable symbol of China. After dinner, get onboard your overnight train to Xian and relax.
Day 6 : XIAN
meals: L
Arrive Xian this morning and visit the breathtaking Terra-Cotta Warriors and Horses Museum. Discovered by several local farmers, the 2,000-year-old lifelike warriors are considered to be the Eighth World Wonder. Travel to Xian's ancient city wall this afternoon and enjoy the panoramic views of the city. Being the only city wall in China that remained intact, it became a popular area to stroll, exercise and ride bikes.
Day 7 : XIAN - CHONGQING
meals: B/L/D
After breakfast, visit the Shaanxi Provincial History Museum for an in-depth look at China's extensive history. Constructed in the Tang Dynasty style, the museum currently has 2,000 historical and cultural items on display; in fact, they are just small representations of the entire priceless relics collection. After lunch, get onboard your afternoon flight to Chongqing. Upon your arrival, your English-speaking guide and driver will transfer you to the cruise ship. Set sail late this evening.
Day 8 : YANGTZE RIVER CRUISE
meals: B/L/D
This afternoon, enjoy a shore excursion to either the market town of Wanxian or the city of Fengdu (City of Ghosts). Return to your cruise ship this evening for a special Captain's welcome dinner as your ship resumes its voyage.
Day 9 : YANGTZE RIVER CRUISE
meals: B/L/D 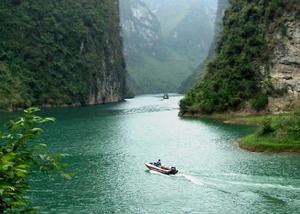 Sail through the first two gorges: Qutang and Wuxia Gorge as you enter Kuimen Gate. Then explore the beautiful Lesser Three Gorges, where you will go upstream along the pristine waters by boat, pass by farmland and villages, and at the same time enjoy the spectacular countryside sceneries. Return to your ship this afternoon and resume your journey. Sail through the ship locks of the Three Gorges Dam this evening.
Day 10 : YICHANG - SHANGHAI
meals: B/L
Early this morning, sail through the last and most treacherous of the Three Gorges: the Xiling Gorge before arriving in Yanjiawang for a comprehensive Three Gorges Dam visitors' center tour. In the afternoon, take a quick flight to Shanghai and check into your hotel.
Day 11 : SHANGHAI
meals: B/L
After breakfast, visit the Yu Yuan Garden that is constructed in 1559. The gorgeous garden has ancient trees, ponds, bridges, sculptures and more than 40 buildings. Pass by the main shops and restaurants in the neighboring Yu Yuan Bazaar on your way to lunch. In the afternoon, visit the Jade Buddha (Yufo) Temple. The temple is comprised of three main halls and two courtyards. This Buddhist temple draws its name from the two large jade Buddha carvings brought to Shanghai from Burma in 1882.
Day 12 : SHANGHAI - USA
meals: B
Your guide and driver will transfer you to the airport this morning for your international flight back to the United States.

Note: Customer Commitment - Each Lotus agent is committed to respond to each email with an acknowledgement of receipt within 24 hours. If you do not receive email acknowledgement within 1 business day, please check your spam box for our agents'response e-mail or send your notice to iris@lotustours.net or call 1-800-956-8873.
To review full listing of terms and conditions, refer to: http://www.lotustours.net/info/terms.shtml
China Orphanage Addresses Colorado Heritage Camps Holt International Photo Gallery Sitemap
Lotus Travel, Inc. 5390 Col De Vars Pl NW, Issaquah, WA 98027 1-800-956-8873 Privacy policy