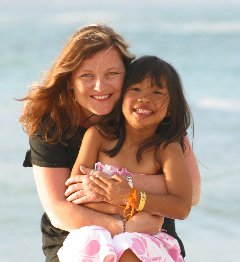 Lesley Bleakley, adoptive mom and her Vietnamese born American 6 year-old daughter left their NY home and moved to Hanoi.  Lesley chose this year-long sabbatical from work to immerse herself in Hwa’s birth culture while volunteering at the Blue Dragon Foundation (http://www.streetkidsinvietnam.com) in Hanoi. Blue Dragon is a non-profit organization founded in 2003 and is focused on providing school scholarships, meal and homes for 800 of central and northern Vietnam’s most needy children.

Lesley says that when she “felt the tug of motherhood I wanted to adopt a child without a family”.  She recalls her “meltdown when confronted with the lovely Hwa.”  Lesley sincerely counts motherhood as “the best thing I’ve ever done”.  Prior to taking on this much planned year long volunteer assignment, Leslie had worked her way up to the US CEO of Beggars Group, which is an independent group of record labels, whose revenues have grown from less than $1 million to over $20 million during her leadership tenure with the group. She had said, “Now it’s time to do something the less fortunate.”   Lesley is writing a blog called “Hanoi Oi Choi Oi” – loosely translated as “Hanoi: oh, my goodness!” It can be found at http://hanoioichoioi.wordpress.com/   Lesley shares about friend making, language lessons and a recent bout with the H1N1 flu for both of them. 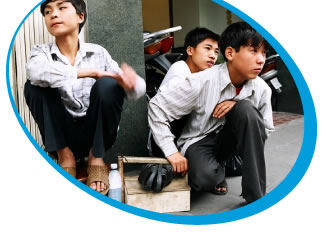 The blog shares just a bit of what the Blue Dragon Foundation does.  Blue Dragon has a training center in Hanoi for 250 kids and a residence for 20 high risk children.  It also offers a back-to-school program in the province of Bac Nanh for 350 “at risk” children.  There is also a house in Hoi An for another 30 kids and a training program in Hue for children rescued from a flower selling trafficking ring.  Most of the children are between eight and 15 years old who come to the cities with no money and maybe a few years of school. The fortunate ones find servant jobs, working 80 hours per week, often earning about $.07 per hour.  Others scrape together a living as shoe-shiners, flower-sellers, laborers, drug dealers or, in some cases, prostitutes. These kids will live in trees, under bridges, on boats, or in slums that pack people in. 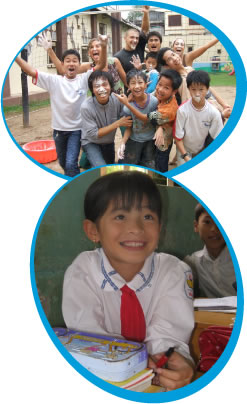 The work began gradually through Michael Brosowski’s conversations with the shoe shine boys of Hanoi.   He recalls sitting in 1,000 year old section of Hanoi in a café drinking coffee and talking to anyone who would listen.  As it turned out, it was the shoe-shine boys, as they plied their trade outside the silk shops and budget hotels who were doing most of the listening.”  He fondly recalls, “After spending time with them, I remember thinking, ‘These are the most genuine people I’ve met in Hanoi.  They have absolutely nothing, yet they’re not trying to rip me off.”  He tells of starting impromptu English lessons as a result of these interactions, whose classes doubled and then doubled again.  After holding English classes in his home and starting soccer games on Saturdays for he boys, he was scolded by his landlord for having “vagrants” around; and told to desist by the government. He was then confronted with a decision and realized he couldn’t leave the vulnerable street children he had become so fond of. He says, “….Nobody ever cared for them before.  They want to be loved, and they want a better life.  When you tell them that they deserve it, that they are as valid as the next person, the transformation that comes over them is amazing.”

He shares that running the foundation does not have any “typical” day, but sometimes a daunting “to do” list.  He says, “An average day might include, convincing the local police to find the machete-wielding hit man who almost killed one of our young students because he had a similar sounding name to their intended target; and freeing one of our boys who was sent to jail without due process for stealing fruit.” These are not the sort of problems I envisioned having when we opened our doors.” 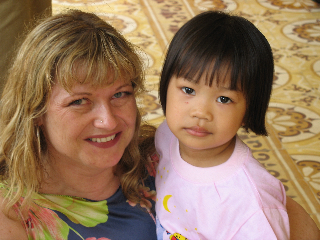 Lesley is thrilled to be there helping out.  When discussing the big leap Lesley has taken not only into single motherhood, but also to spend a year in Hanoi, Lesley recounts a lifelong draw to Asia.  As an only child during the Vietnam War, she begged her mother to adopt one of the children being airlifted out.  Later, she traveled widely through Southeast Asian and on one trip to Cambodia during the Water Festival; she watched the kid’s faces during the fireworks.  She recalls of that experience, “The kids just looked up, unspoiled, not screaming, not asking for anything.  Of course, poverty had made them that way.  We did what we could, but it seemed so little.”

Bleakley also cited the time during one of the trips when she brought bags of oranges to a school.  She had read that, rather than bring candy or other gifts, it was good to give fruit.  She and her friends visiting felt awkward and horribly shy, but she gave out the oranges to kids, 3, 4, & 5 years old, who were happy to get them. “It was a pivotal moment, she says, “I wanted to do it.  I was determined to do it.  You do what you can.”

The Blue Dragon Foundations has a variety of ways to get involved for anyone desiring to help. Sponsoring a child or dropping off needed supplies while visiting in Hanoi are some common ideas. For a list of more ideas and details, click here: